I just had a nice stay in Nairobi, Kenya. I spent two days at the National Archive, and two days at a regional conference on the electric power industry. Nairobi is an impressive city, very much the leading metropolis in East Africa. A city of industry and government, with broad avenues, multi-lane highways (with clearly painted lane lines), and broad sidewalks. Compared to the chaotic heat of Dar es Salaam, cool Nairobi seems like a a medium sized European city, at least downtown. I didn’t visit the infamous Kibira slum or the high-end suburbs. Inequality is certainly very real here, as nearly everywhere in the world today. But I doubt there is any realistic political solution to reduce poverty, eliminate inequality, and maintain anything less than a police state. Despite it all, the much-maligned corruption (that I did not experience), the rapid population growth, the regional disparities, and Tammany-Hall politics there is a growing middle class. New York of 100 years ago would not be a bad point of comparison, if anything Nairobi is probably a little bit more orderly with all its fashionably dressed young people moving at a business man’s pace. And there is even an excellent Italian restaurant with excellent house wine, bread, appetizers, and pages of pastas, raviolis, or a leg of lamb (I was too taken with the risottos), and coffee mousse, all for under $30.

I had coffee at a local Java House chain this morning with a former student from Tumaini University, who contacted me on Facebook saying, “I suppose I should have tea with my former communications lecturer.” Her father had seen an ad for the second class of law students at Tumaini, and went all the way down to Iringa Tanzania to visit the place and have a chat with one of the vice provosts. He, like many our students’ parents I suspect, found it a quiet pleasant place, not subject to the constant strikes and disturbances of other universities in the region, and safe quiet environment for his daughter. She took a law degree there, returned to Kenya and took the bar exam, worked for a law firm for eight years, and then struck off on her own and now runs her own firm. She focuses on family law, including complex inheritance and child custody cases of the sort that used to be resolved by an elder who skillfully juggled multiple claims by the quick and the dead. Tumaini was then in the process of becoming an excellent small college, with one of the best law schools in the region. It has since grown a little too fast probably, and it will be a very different place when I get there next week. 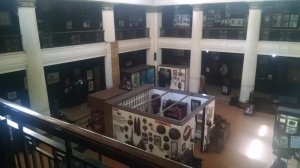 Museum at the Kenya National Archives

The National Archives is a grand building with grecian pillars and a glass-encased collection of regional art. Unlike the royal headaches and expense of getting access to the national archives in Tanzania, in Kenya you pay a very reasonable fee for an access card and then you look up your topic on the computerized catalog, write out some pull slips and pretty soon someone brings you out a stack of files. There are files going back to the late 1800s in there, but I spent my time looking mostly at the minutes of board meeting of the old East African Airways, and then the piles of letters and memos relating to its liquidation in 1976. The bankruptcy went hand-in-hand with the collapse of the East African Community. I’m sure the Greeks of today could commiserate. Trade disparities between different economies are hard to manage. Tanzania had been paying into a liquidity fund as they tried to keep the airline afloat, and then got little out of it when they sold off the assets that were based in Kenya, including a fleet of fairly up-to-date jets. 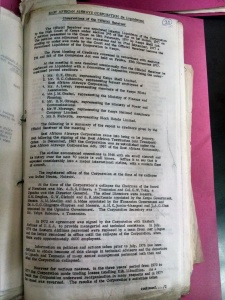 I attended the conference tilting at windmills, but may have to settle for making some connections that might lead to Texas Tech engineers lending a hand in training a new generation of technicians and systems designers for the expanding electric infrastructure in the region. I met a handful of Tanzanian officials, the most impressive of whom was the head of the Tanzanian energy and water regulator, who also happens to hail from a village 15 miles outside of Iringa.

He said that they have come up with pricing policies for nearly every type of electrical power, except wind which brought endless complications, and so they left it to be worked out on a case by case basis. There are about 400 MW of planned wind farm construction in both Tanzania and Kenya, and this on grids that currently serve loads of only 1500 MW or so (which is about what a small town might consume in the US). This has made officials reluctant to allow any more wind power, because its intermittency requires that it not make up more than a quarter of total production without some sort of parallel battery power to smooth it out. So my idea for a wind farm may have to wait, despite my highly scientific survey where I found that there are signs on the highway near Iringa that read “Warning high winds, drive slowly.” 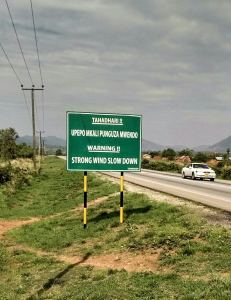 East Africans are world leaders in preventing global climate change. In addition to consuming a tiny fraction of the power that a typical American consumes, most of their power comes from renewable, non-polluting sources. The biggest single source of power in the region is hydropower, and all the countries are building more dams. Kenya is crowing (with good reason) about its flagship source: geo-thermal, which has the capacity to provide 17,000 MW, a high-quality base load for years to come. Tanzania has discovered 50 trillion cubic feet of natural gas, which is clean if not absolutely green. The advantage of natural gas is that a gas plant can be quickly ramped up to full power, and thereby pair well with intermittent sources like wind and solar. Hydro can be used similarly, and one technical guy said this is part of the reason that the large Lake Turkana wind farm could be absorbed onto the grid (that and the extremely steady winds blowing through the area).

But while some tilt at windmills, others have their own obsessions on favorite power sources. Despite the blunt advice of the chair of the Kenyan regulator, someone in Kenya continues to push for a coal plant on the medieval port city of Lamu, a sleepy tourist town that has neither coal nor industry to consume the power. And unlike gas, coal needs to be burning at full capacity to be economical. Some are fixated on concentrated solar, which entails building thousands of mirrors which reflect light up to a box of super-heated salt on a tower, which is then used to heat water for steam. It provides a solution for the intermittency problem of most renewables, since the salt can retain heat through the night, but it requires a combination of sun and water access which are relatively rare in the right quantities in the same place. Then there was the panel addressing the question of building nuclear in Kenya (gentle reader, you are not the only one saying WTF?). Buying a power plant is sort of like buying a car or a phone: “power! efficiency! quality!” Nuclear is the Humvee of power plants.

More practical solutions exist, but East Africa is caught in a quandry when it comes to electrification. Investing in a power plant requires the expectation that someone will pay for the electricity on a daily basis for 25 years. Everyone wants to bring power to the villages, but that is an expensive proposition, and a villager with three light bulbs and a radio is not going to be buying megawatts of electricity. So the key to electrification is industry. What I learned is that it is not really a question of “build it and they will come”. If someone builds a factory, a new geothermal plant could be put online within two years. What is needed for industrial development is a market for the products. Everyone around here admires South Korea, which had a similar economy in 1960. South Korea has over 20 nuclear power plants, but then again they built up a major shipping industry that became the backbone for industrial development. The question is what will become the industrial backbone in East Africa is still up in the air. Companies look for supply chains and markets. And the smartest commentators at the conference pointed out that this where they have to start.

As I was leaving the conference I happened to sit down for a little milkshake in the cafe at the conference venue, which is a 40-year old landmark structure in Nairobi. I struck up a chat with a British fellow who was sitting out there, who turned out to work for the hospitality company that organized the conference. He shows up on site to inspect the security and safety arrangements of their events. He said he understood that if you want to organize and run something in an East African environment, you take certain risks. Basically he was saying that from a security and safety perspective the conference center was a disaster. 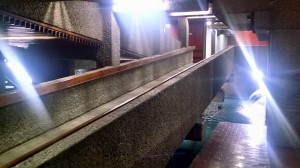 It is a magnificent building, of Frank Lloyd Wright inspiration, with internal waterways, patterned wood beams on a textured concrete infrastructure that add up into a very nice example of African-inspired Scandinavian design from the early 1970s. But haphazard wiring and renovation presented a fire danger, general maintenance behind the scenes lacking, and security arrangements “nothing more than window dressing.” If the Somali terrorist group Al Shabaab wanted, they could quickly take over and turn the place into a fortress, as they did with Westgate Mall last year. I found the airport to be much the same. But Kenya, as with Tanzania, depends less the fantasy of failsafe security measures on-site, and more on internal surveillance, with local networks of reporting and information, that helps the security forces keep tabs on threats. This informal arrangement is ripe for abuse if a truly inhuman government came to power, but as it is these systems work fairly well, if a bit arbitrarily. You wouldn’t want to get marked in their sights.