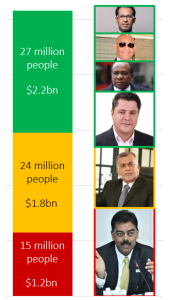 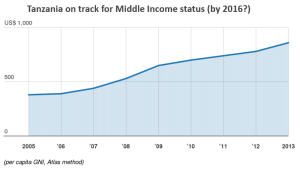 His insights are a little dry, but they give the statistical evidence for the description of the last post.

Are you for us or against us?
All this war talk is reducing politics to testosterone

Elsie Eyakuze is the best writer among Tanzania’s commentators. Make sure you turn the page for the last paragraph. She writes fully formed essays. And I think her wish for a political system that can handle the heat and passion of multi party politics is key.

Tanzania’s first president made the argument as independence approached that the country should have a single party system for 15 years. Multi party politics, he feared, would descend to the level of “a mere football match,” or become a destabilizing battle for hearts, minds, and bodies. The difference between a football match and political choice is, as Eyakuze suggests, ideology..

The ruling party, CCM, jettisoned a socialist ideology long ago, but arguably still retains an ideology of enforced national unity. It is an ideology drowning in corrupt cynicism. The main opposition parties have likewise thrown ideology to the wind in their determination to overthrow the lodged ruling party. The biggest opposition party, CHADEMA, cast aside its most popular young leader. The ejection of the fiery young Zitto Kabwe was ostensibly about corruption, but seemed mostly about jealousy. To be fair, however, Zitto had mostly abandoned CHADEMA’s free market alternative to CCM’s (long abandoned) socialism, and was celebrating the socialist aspirations of a more idealistic era.

Eyakuze’s concerns here are that ideology should provide a platform for real debate about who to elect, and somehow prevent politics from becoming a mere football match standing in place of a real war.

Just before boarding the plane in DC, I got a message from a friend with whom I’ve stayed for months at a time during previous trips, who recalled that I would be arriving around now. He moved to Finland to work on schooling for a second career some years ago, and left a house here in the care of some younger nephews and cousins. He is now aiming to move his family back to Tanzania to build an independent life here again. Growing potatoes will be his starting point and he has acquired some land and sown some experimental crops. It is a growing population and there is a demand for potatoes. He worked for years for the national electric company, a dysfunctional organization in which he was mostly just treading water. That doesn’t appeal to someone with his forthright energy. His has been a life of constant hustling, and from a youth as poor village boy, he has launched his young family into a very different future. He is back in Finland now, and his wife still here visiting with parents upcountry.

Just as I was entering the airplane, I got a message from him asking when I would be arriving. I said tonight, and he made sure that a driver who knows both of us was there to pick me up at the airport and bring me to his perennially unfinished mansion on a hill in the suburbs of Dar es Salaam, which is where I had a very nice sleep last night despite the wedding party down the road who set up two tents and are blasting music all night, all weekend. I’m here with three young men, who take care of the house as they find their way towards the next thing.

It is cool in Dar es Salaam this time of year, and his hilltop house has a nice breeze blowing across it all the time. The place is a little comical, as it is a product of a certain type of construction that happens in countries without well-established means of tracking credit records and loans. You save up money, and you build what you can, and then you add to it and improve it little by little. In the first stage you hope to build enough to enclose a livable space, usually one of concrete walls and unfinished ceilings. You build because that shows you are doing something with the land, and therefore have a right to retain it. You don’t own land here, you lease it on a long term basis from the government through a right of occupancy. He acquired this land from a woman who had occupied it before it was legal to do so, as the area was in the zone of a target-practice range for the army, and the neighborhood is still known as “Explosives.” A populist prime minister declared that the squatters could stay, and the woman parceled up her land and sold it off, and my enterprising friend bought it, and worked out the boundary disputes. Most of the properties here are fairly large, and so it is a low-density area with a lot of trees. It is a great piece of land.

One day someone will come along and complete his dream and turn it into a shining mansion on a hill. But now it remains a post-modern concrete monstrosity, prickly with rebar poking out wherever future additions are still imagined. It is this unfinished quality that pervades Tanzania, nothing is done quite right, but then nothing is quite done, hanging out on the ominous rebar are humble dreams and pragmatic ambitions.

Tanzania has an election coming up in October, and the campaign season is well underway. There is a lot of quiet shuffling for position that happens in the year preceding an election, but there is not the interminable election season that we have in the US that lasts for two years. Here candidates are officially announced only a few months before an election. The candidate for the ruling party was officially selected a few weeks ago and has been touring the country making speeches to party faithful and presumably preparing a “ground game” of young people mostly, ready and willing show up to party rallies and generally get out the vote.  I’m not quite sure how this happens here. I don’t get the sense that you have the sort of door-knocking that we have in the US. Much more of politics takes place in public arenas or behind closed doors. I hope to find out a little more about how this happens in the coming weeks.
Today they had the official party meeting, analogous to American party conventions, where the official candidate is officially announced to officially start the campaign. We listed on the radio to a rally that turned out thousands in a large open area in Dar es Salaam, a swampy area that floods in the wet season, and so remains without construction, except for a few hardy, and impoverished, squatters. A series of speakers all attested to the candidate’s qualifications and the praises of the ruling party.
People are tired of the ruling party here, Chama cha Mapinduzi (CCM or the party of the Revolution). It grew out of the party that mobilized the population and negotiated with the British for independence. It was once led by the idealistic philosopher-king Julius Nyerere who used the party to keep firm control over the country and guide it down an ultimately disastrous path of socialism. The party instituted a remarkably inclusive political establishment, and then initiated the move back to a multi-party system in the 1990s. It is an effective, and not altogether bad party, but many feel it is hidebound and corrupt, and they would love to see an opposition party take its place. And this sounds like your average African country, but Tanzania can be a surprising place. The politics here are a little more open than many places, and a little more idealistic than others. Hidebound and corrupt it may be, but the ruling party is showing itself to be more agile than expected, and more idealistic. 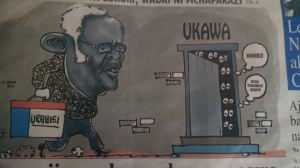 Cartoon, now a month old, from Majira (I think). Edward Lowassa an old politician of the ruling party doesn’t get the nomination to be the presidential candidate and so skips off to join the opposition who, for years, had been using him as the exemplar of ruling party corruption. “Urais” means presidency. In a clever play on words, the homophone “Urahisi” as his briefcase says (in opposition party colors), means “easy”. UKAWA is a coalition of opposition parties. The suspicious eyes peering out from the office say somewhat doubtfully “Welcome…Come let’s take out ‘sisiem’ (CCM, the ruling party).

And it just offloaded one of its most hidebound and corrupt politicians on the opposition party. Edward Lowassa was removed from the office of Prime Minister in 2008 as a result of a scandal concerning a contract to install some temporary diesel electric power supplies for Dar es Salaam. He remained in the party, biding his time, and presumably building up a large patronage network using wealth of uncertain provenance. He may have significant investments in the tourism industry around the game parks of northern Tanzania, but there is no major business that one can point to as an income stream. He has no personality and the source of his political support is unclear, except to the extent that it may derive from a patronage network. I recall seeing posts singing his praises on various social networks, probably posted by paid agents (social networking for politicians is a big business here during the political season). With all the panache of a Hillarian politician in Iowa, Lowassa has this week: stepped gingerly into a daladala (public minibus, usually packed to the gills with people sitting in tightly arranged steel tubing benches barely covered in a bit of vinyl and discarded mattress foam) and took a short ride, chatted and maybe even eaten from a plate of a “Mama nitilie” (literally Mama toss a little of that [in my plate], meaning a meal from a woman who cooks in some dusty corner of an outdoor market or in the middle of a traffic island, dishes a nice homemade meal into a plastic plate and delivers it to the customer somewhere in an office that retains its confident “how can I help you” despite the sharp edges of broken tiles in the floor), and generally become an awkwardly hesitant Mr. everyman (just like Hillary and co.).
Many had thought that Lowassa was being “cleaned up” by a corrupt group of party bigwigs over the last few years in preparation for a presidential run, and it would seem even he thought this. Because he was greatly disappointed that when the party national committee met (a group of several hundred leaders in the party who meet annually) and began to narrow down the list of candidates, he was eliminated in a middle round, and did not even make the top five. Finally there were three, and then John Magufuli was announced as the candidate, much to Lowassa’s chagrin.
Dr. John Magufuli is a widely admired former cabinet minister, who served in several different positions, most notably as Minister of Transport and Works where he seemed to finish a lot more projects with decent results than his predecessors. He is known to be about as clean as they come, with no scandals, and many anecdotes attesting to his smarts, his honesty, and his work ethic. He is an impressive choice, and a surprising for such an ostensibly hidebound party. With ruling party political machine and a candidate that so thoroughly belies the party’s negative image, he seems hard to beat.
More on Tanzania’s politics in future posts.